You are here: Home / Archives for guelphproud 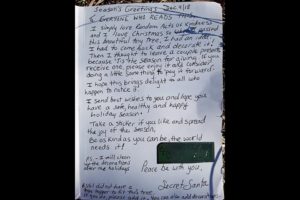 The busy holiday season is upon us with just one week before Christmas Day.  Lunch hour came and went however the memory of what made the day still lingers.  Much can be accomplished on a one hour lunch break, thoughts of going for lunch with friends, last minute shopping or a walk around Riverside Park in the sunshine.

Choosing the latter option was a great chance to stretch the legs and clear the mind with a little time in nature.  A favorite path at Riverside Park which has been referred to the, “Bridge to Bridge walk”.  The walk started from the East side of the Speed River walking trail accessed from the Speedvale Ave. Bridge towards the Woodlawn Bridge.  As the footsteps rounded the pathway just meters from the low lying woods near the Woodlawn Bridge, there it was glittering in the sunlight.

The beautifully decorated 3.5 ft. small pine tree was easy to spot just to the left of the path. Tiny red bows, a set of battery operated colorful lights, and a few ornaments adorned this tree in the woods. Underneath the tree lay a few presents marked with a Christmas tag which read, “To:  You, From: Secret Santa” A card dangled on the tree in a plastic sleeve marked, “PLEASE READ ME!”

Looking around to see if anyone else was around besides the birds flying above.  Nostalgic feelings of past Christmas’s were brought up which brought a smile.  The card read, “Season’s Greetings to EVERYONE WHO READS THIS…..”  It spoke about random acts of kindness and Christmas being a time of giving.  “If you receive a gift, please enjoy it and consider doing a little something to pay it forward.  I hope it brings delight to all who notice it.”

The world can be such a very busy place, Thank you to the kind soul who took the time to leave this very thoughtful message.  “Be as Kind as you can as the world needs it!”  This certainly made the day and helped to restore joy in the holiday season.  Hopefully many will benefit from this beautiful Act of Kindness!