You are here: Home / Archives for live theatre 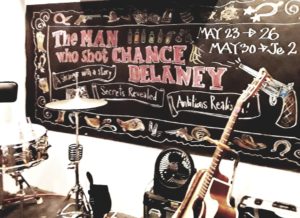 It is so great to have a night out; especially a date night with your 12-year-old daughter.

My daughter luckily still likes to hang out with her Mom on a Friday night, I am not sure how much longer that will last.  Meaghan and I were excited to watch the performance of  The Man Who Shot Chance Delaney together as she performed in a Western play with the Centre Wellington Children’s Drama Club in Fergus not too long ago.

We settled into our seats and were transported back to the 1900’s to a small town in Kansas where the majority of the play took place in the Lucky Dollar Saloon along with several other locations.

This two act play was written by Canadian playwright Ian Weir.  I had read about Weir he had a dream of being a writer when he was young, but was told like many artists, “Yes but what will you do to earn a living?”

We watched the 6 experienced actors who all had multiple roles in the play with delight and awe as they quickly transformed from one character to another mostly without even leaving the stage.  The visual effects of the lighting and set design all made for a great Wild West gun slinging story.

I especially liked the quick flip of an apron strap which changed the lead actress Molly into a totally different character once the strap was properly fastened on the apron. There were the many voices of Perkins, the fast talking Brewster and Abilene who changed from a young women to a little boy with just a flip of a hat.

The storytelling began with a stranger who entered the Saloon and started to share his tales.  Meanwhile at the same time the tales were told by each actor helping to get a better glimpse of how the story unfolded.  The story included like any good Western shootouts, bar fights, and broken hearts.

Chatting with my daughter on the way home she commented, “It was as if there was multiple layers to the characters and you had to listen really closely to see what would happen next!”  I agreed and said “It sure was an evening of great storytelling and was so well done.”

From the experience my daughter had in a live production, it give us a glimpse of the many hours of rehearsal required for a production.

Many thanks to the Director of the play Denise Gismondi, Judi McCuaig the Producer and Bev Maintenay the Stage Manager and Assistant Director.

The GLT has many volunteers that help make the productions run smoothly and I am told they are always looking for more people to come and help them share the love of arts and the Royal City.

The entertainment continued after the show when we walked into the lobby and a dance party had begun with the Range Riders band playing country music.

If you want to find out Who Shot Chance Delaney and how the story ends you still have time to attend a show, it is running until June 2, 2019.

Bring a date to either next Friday or Saturday’s evening performance and you can kick up your heels to the Dan Badger Band playing both pre show and post show with the bar open later.    You can purchase tickets at the Guelph Little Theatre, http://www.guelphlittletheatre.com/. 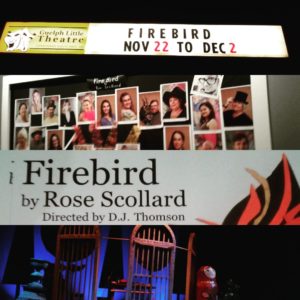 The Firebird is a wonderful Russian folklore fairytale production currently being performed at the Guelph Little Theatre till December 2nd by Rose Scollard.  The Director, D.J. Thomson commented in the playbill, “Our team has worked hard to present all the magic of theatre out in the open for you, our community, to share.  We truly are thrilled that you are here and hope that you find your moments to save in your memory banks.

“It was a night for the memory bank”, a saying which is one of my father’s favorite.  My son & daughter who were seated on either side of me, both agreed.  Being that the performance was on a Friday evening, the kids were tired, like a lot of people by the end of the week.  However they were both on the edge of  their seats the entire performance.

We entered the quaint venue which is in an old warehouse type of building in the Ward district of Guelph.  We could tell that we would be in for a special night as we peeked into the venue and could see the stage was adorned with brightly colored Slavic backdrops, a solo rock set on the left side of the stage, jewel covered high back chairs fit for a Princess.

Later we would watch Princess Irenka looking into a mirror staring at her youthful beauty not knowing later in the evening she would be staring at gray hairs and wolf fingers, howling like a werewolf.  This is where we watch another character Baba Yaga pop out of a large trunk which also appeared stage on.

The story was introduced by two-headed cyborg dragons who tried to free the Firebird and save their land from the  evil Magician Koshchei who wanted to marry the beautiful Princess Irenka.  Luckily for her the story with its twists and turns Irenka returned to her beloved Alexa.

Leaving the show my son said to us, “That was sooooo good, everyone should come and watch this!”  Big sister Meaghan agreed and said she really enjoyed all of the costumes.  The Firebird costume was her most favorite, she said “it was so colorful and it looked like it was really well done”.  Meaghan thought Firebird was a really good dancer, and said she was inspired by her graceful dance movements.

The story of the Firebird inspired many literary works, including “The Little Humpback Horse” by Pyotr Yershov. The most famous production of the Firebird was by Sergei Diaghilev of Ballets Russes who commissioned composer Igor Stravinsky to create the enormously popular large-scale ballet score known as The Firebird.

The sound effects were a wonderful addition to the play.  The four foley artists who were in the background creating a meerut of sounds throughout the scenes helped bring more life to the production and were great to watch alongside the actors.

If you want to make some memories for you and your family, this is a great play to attend.  Buy your tickets here for this performance, http://www.guelphlittletheatre.com/tickets/.  Perhaps it will evoke memories of your childhood as you watch the Princesse, dragons and magician in this fairytale story.  Whoever you take with you, I am sure just like the director and my Dad say, “It will be one for the memory banks!”.