You are here: Home / Archives for Theatre & Arts Community 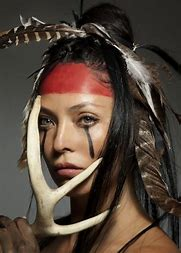 The River Run was very lucky to have an Internationally recognized Indigenous performing arts leader Santee Smith to launch the new, Miijidaa Life Stories speakers series.  Entering the Cooperators Hall you could sense it would be an intimate evening filled with insight into the life of a creative soul. 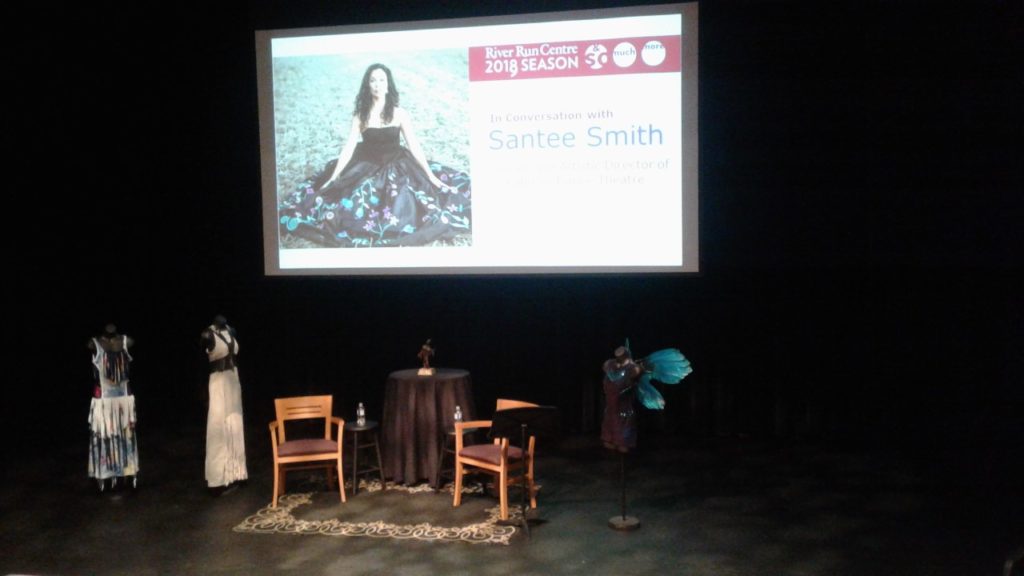 The stage was set with beautiful costumes and 2 chairs one which was guest, Santee Smith and the other was taken by host, Cameron Smillie who wears many hats in both the corporate and the performing arts world.  The night began with host asking Santee a few questions about the very beginnings of her life.  Here is a link to one of her past performances, https://ca.video.search.yahoo.com/search/video?fr=mcasa&p=santee+smith+performances#id=1&vid=dc32e16c556d47d42d02114c9a408845&action=view.

Santee shared with the audience that she is from the Turtle Clan, Six Nations of the Grand River, Haldimand Treaty territory.  She shared with us that she is a proud Mother to a 20-year-old daughter who is currently studying at the University, and like most parents could not believe where the time went.

It was hard to imagine what the early years of life were like for the beautiful women who took centre stage.  She had endured much hardship in the early years and mentioned many of the events she did not remember.  At age 3 she had endured the first of three accidents which left a major impression on the life of such a young soul.

At the young age of just 3 years old she was run over in a car by her Grandmother.  She endured many injuries and was hospitalized for over 3 months and many weeks of rehabilitation to learn to walk again.  Then recovering from this injury she was riding on a bicycle with her father who was at the time a carefree 20 something year old riding down a hill with his baby girl strapped on the back of his bike with a homemade carrier and by the time they had made it down to the bottom she had somehow fallen off the bike with her ankle caught in the spokes of the wheel facing the opposite direction.

With three accidents at the age of just 3 years old she needed to regain strength and with her dancing ability at such a young age she began her journey of entering the world of ballet.  She shared with the audience that thru her natural talents and her dedication she was accepted in the National Ballet School at age 11.  So at that preadolescent age she left home and studied.  Her close-knit family would call her and tell her she, “She could come home at any time, that they would just come and pick her up”.  However by the end of the call she shares she would feel better and carry on with her love and passion of the dance world.

Dance and the performing arts was Santee’s whole world and left little for much else.  She finally became disillusioned with the dance world, and left at Grade 11 to explore other options.  She didn’t realize there was another world outside of dance until she began exploring what every other young women at the age explores, which she giggled and said “included a few parties along the way!”

She ended up going back to school and entered University and gained a degree in Kinesiology and thought she would work a physical therapist until she entered the profession and realized it was not for her.  Her love of psychology that she minored in allowed for more schooling and she eventually realized that she wanted to return back to the performing arts.

We watched 3 short films which showcased a few of Santee’s work.  The audience could gain a better insight into the creative force who sat in front of us, with the host describing how Santee’s ability to process the start and finish of each production with all of the elements such as idea, dance, choreograph, design, execution many times are the sole work of the multi talented artist.

When asked what is next by host you could tell that may take a whole other evening of conversation with Santee to delve into her world and share her vision for the future of her arts, including the Kawa:wi Dance Theatre which has served as a vehicle for Smith’s practice for than a decade.  She founded the theatre in 2005, Kaha:wi means “to carry” in Mohawk.

She was available for a VIP experience of post show Meet & Greet which took place in the Sleeman Atrium.  Here is a link with some of her students at her performing arts centre, https://ca.video.search.yahoo.com/search/video?fr=mcasa&p=santee+smith+performances#id=5&vid=921d0693d8a508735bff8388abea67f5&action=view

I look forward to more performances at the River Run Centre, here is a listing of upcoming “WHAT”S ON”, http://riverrun.ca/events/whats-on/?event_search=&event_month=&event_category=river-run-presents