You are here: Home / Archives for meltdowns 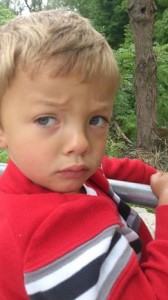 Motherhood can be so tough at times.  My five-year old little angel or should I refer to him as the little “@*i*”.   This morning along with most morning are very tiring for this Mommy to get him out and on the bus.  He has grown an aversion to anything tight on him especially his pants and shirts, and forget underwear!   Changing him for hockey in the locker room can be a little bit terrifying when I remember he did not put on his undies.  Standing all of four feet tall with his chest puffed out, he makes loud farting sounds and lets out a big heckle.  Then looks at me and says “What?”

This boyhood stuff is challenging and rather overwhelming at times for this mature mommy, but I would not change it.  He is forever testing my patience and tolerance and I must say they are running rather thin lately.  I am sitting on the couch thinking of my day, and I guess enough time has passed now since I had to literally hold him down to put his pants and boots on him today before he went on the bus to hang out with his peeps.  I might consider seeing his little grin and want to give those little dirty hands a “high-five” when I see him in the next hour,  when he returns home to see what family adventures he can create for us.

His poor Kindergarten teacher reported to me yesterday that Noah and a couple of others, (his friends)  had been separated as they where disrupting the class with (farting noises)…. or who knows what else?  Yep that sounds like my boy!

I love him, but I tell you some days are so draining that I must tell you it took a lot of deep breaths and saying little prayers to ask for a little patience for just another day.  Last night we had company and he had just gotten out of the bath and was lounging on the couch stark naked after a hard day at the office.  Just when I turned my back I noticed him from the corner of my eye on a chair while holding up his blanket trying to reach for a cup out of the cupboard.  I turned around a little mortified to think there were no undies underneath.  He successfully made his way off the chair after Mommy suggested for the 100th time that day “to go put your clothes on”.  He returned from his room looking rather suave in his  2 sizes too large hockey jersey and shorts.  I just looked at him and thought to myself “It is a good thing you are cute!”

Well I must go and see what kind of trouble he might have gotten himself into at school today, fingers crossed it was a good day!